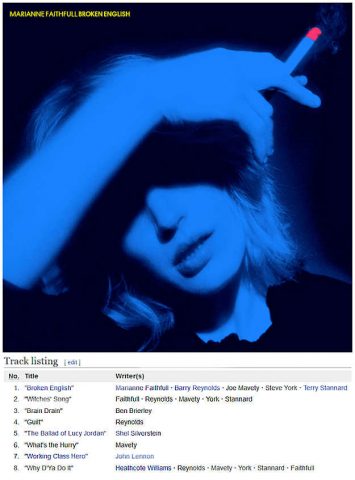 Even casual followers of this blog or any of my social media know that I’m an uber fan of pioneering gay folk duo Romanovsky & Phillips. More careful reading will also bring up musicians such as Paul Williams. They, and plenty of others, have been a vital part of my mental health journey.

One that I’ve mentioned here only in passing is Marianne Faithfull; although I frequently play her albums.

The first of her albums that I heard was Broken English. My then-partner had it when we met in 1980. I don’t have it now, but many of the same tracks (see the image here for the track list; click it for a larger version) are on the 1994 release Faithfull: A Collection of Her Best Recordings which I do have. Along with the 2008 Easy Come, Easy Go and her latest; She Walks In Beauty; see the second image.

Part of my initial attraction to her music was her voice; artists such as Kate Bush, Bonnie Tyler, Cyndi Lauper, Alannah Myles and Marianne always catch my ear. 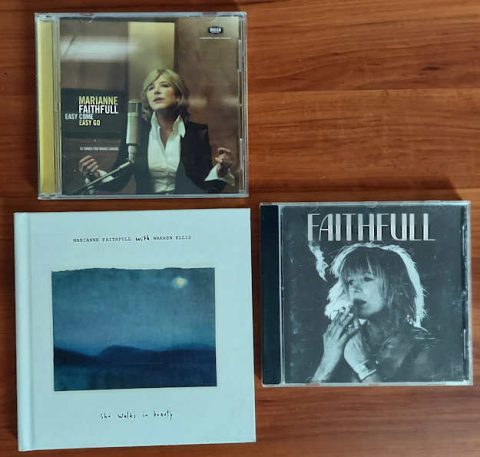 As a story teller and poet, lyrics are very important to me. Most of my favourite songs are what used to be called “Easy Listening“; now more often known as light rock, folk rock or even ‘Mellow Classic Rock’ (Sirius channel 17). A few raunchier songs (Why D’Ya Do It; Guilt) do find their way into my rabble-rouser heart.

This post was prompted by a FB Friend’s request to reveal “what song you played on repeat when you thought your whole world was ending.” For me, the song is Ballad of Lucy Jordan. I don’t recall ever hearing the Dr. Hook & the Medicine Show 1974 version (although I very much luv their “Sylvia’s Mother“).

Marianne’s is the only version I ever need.

The song describes a lonely housewife who finds their life empty and dreams of visiting Paris. It mentions childhood memories of their Father, and ends with a vagueness that can be interpreted as having committed suicide- or as Marianne suggested in a 2007 interview* riding in an ambulance to a mental hospital. (* source: Wikipedia)

The chorus goes:
“At the age of thirty-seven
She realized she’d never ride
Through Paris in a sports car
With the warm wind in her hair“
Ballad of Lucy Jordan, written by Shel Silverstein.

The song had an influence, at some subconscious level, on my leaving Canada at the beginning of 1996. I turned 37 in July the previous year, and had realized I was most likely going to live past 40- possibly decades beyond that age. This post talks about why I expected not to live longer. Leaving the City of my birth, and my decimated communities, was an act of self-preservation. #survive2thrive