This post is an extension of this recent IG post. Following up a youTube deck review I commented that I offer a series of DDS Double Deck Spreads at GCR which each use cards from two different decks to provide insight into a specific question or topic. Each spread draws from a specific deck for each position; rather than shuffling decks together.

I’m experimenting to see if mixing two decks together makes sense; logistically as much as for interpretation purposes.

Logistical concerns start with trying to shuffle the large number of cards involved; a standard Tarot deck is 78 cards. For many folks that’s an adjustment after using standard 52 card bridge or poker decks. Using two of my D.Virtue-designed, Hay House published, oracle decks would involve 88 cards. My two First Nations traditions decks (created or co-created by Jamie Sams) have 96 cards. Using just one of those decks with a Tarot decks pushes the card count to over 120. Truly a handful. 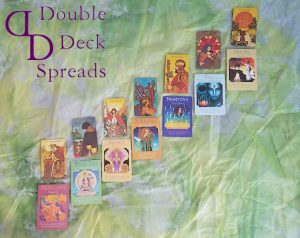 A second concern is having cards with different dimensions. While each pair of the decks I mention above are the same dimensions, they aren’t the same as the others. One pair are 3″x5.5″ and the others 3.5″x5″. Not impossible to shuffle together, but not as smooth as having them all the same. My standard Tarot deck for client readings, the Morgan-Greer, is 2.8″x4.75″. Noticeably smaller.

As for interpretation in a reading, how well any combination of decks will work depends pretty much on the subject of the reading. Each of my existing DDS spreads (link above) were created with multiple pairings, to offer the best fit. I’ve yet to add other spreads to my Etsy Shop, as testing continues. Likewise, intermingling decks won’t be offered until (unless) I am sure they serve the purpose.

That being said, if anyone else is shuffling decks together, I would greatly appreciate feedback, comments, suggestions.