In designing their deck Sister Who did not just create new names and images within the traditional RWS (i.e. Rider- Waite- Smith) universe. Rather, they designed a collection for contemplative meditation that has both significant differences from and clear similarities to that paradigm. The 4 minor suits contain both the most distinctive variation, and most obvious parallels.

Suit names neatly map over the traditional ones. The images used on the pip cards (i.e. 1-10 of each suit) being photograph based, may have fewer details, but nothing on them should pose a concern to folks used to reading with RWS decks. Understanding the 2 of Chalices as the 2 of Cups, for example.

Sister Who’s replacements for the court cards however are not easily read as the Page, Knight, Queen or King of each suit. The Confessor, Celebrant, Angel and Saint not only remove an archaic social hierarchy, they offer us four examples of thoughtful approaches to interacting with all of Creation. Sister Who writes that “The Confessor is that voice that listens and cares without making demands while the Celebrant is that voice that leads actions of deep experience. The Angel is that voice which directs protecting love and the Saint is that voice which lives in harmony with spiritual beings.”

Their approach to the 22 cards of the Major Arcana (Sister Who uses the term ‘Major Suit’) presents a more earthly progression of one’s life than the traditional Major Arcana’s ‘quest for enlightenment’. At the same time, these cards touch on many philosophical questions or concerns. How closely each one aligns to the similarly numbered card in the RWS paradigm varies widely, as that was not a factor in their design.

The Majors, and those comparisons, are the ones I first want to discuss in my blog.

In the Rider- Waite- Smith paradigm, card #16 is The Tower or sometimes, The Falling Tower. The artwork may vary, but the common thread is a tall tower (generally round, and make of brick or stone) from which is falling one or more bodies, and perhaps other objects. The image below shows 4 traditional tarot decks as well as the Tarot of Sister Who. Click on the image to see a full-size version.

Eden Gray suggests the following interpretation in a reading: “the overthrow of selfish ambition, and “pride goeth before a fall, and the fall is coming” (Mastering The Tarot, Signet Edition, 1971, pg.98) Other writers generally have similar meanings; abrupt change- upheaval- from outside forces.

Trish MacGregor and Phyllis Vega, writing in Power Tarot note “this card symbolizes the breaking apart of structures that have kept you imprisoned,” which may mean “the overthrow of existing conditions brings new opportunities and a fresh start.” Likewise, Jessa Crispin suggests “the Tower can be liberating, but only if we don’t cling to what came before,” (The Creative Tarot, Touchstone, 2016, pg.84). 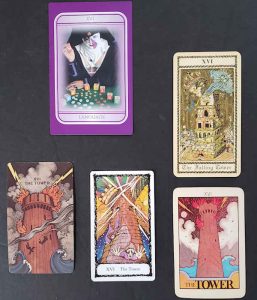 Card 16: Language
“Each moment of life begins with a thought that is often a question, that is empowered by multiple systems of expression-even some that are simultaneously both ancient and timeless. Yet such thoughts are faced with a myriad of sequential choices that can be stacked in specific ways-like the bricks of a wall, a house, or a tower. In the same ways that they can be stacked, however, these choices can also be unstacked and rearranged in order to accommodate changing needs and perceptions. Additionally, each choice-in and of itself-is multi-dimensional; each of these dimensions brings its own unique spectrum of possibilities into view; and each possibility is as multi- dimensional as the preceding choices.“
Image and text © Denver NeVaar

Not quite the same message or meaning. And yet, there is incredible power in words. In languages spoken or un-. How much damage have we done (to ourselves and others) through the careless or intentional use of that power? Sometimes that power strikes quickly, bluntly- while other times the cuts are subtle and the damage done is detected only slowly, over time.

In self-help/ self-actualization/ self-improvement terms; what destructive language do we use? What limitations do we impose or accept? How does repeating affirmations improve our lives?

There are times, if we are blessed, that we hear or read a new word or concept that breaks us open- reveals something we did not imagine. Those ‘eureka‘ moments can be as powerful as The Falling Tower suggests. A current example of this is the expanding vocabulary around human gender and sexuality; non-binary, gender non-conforming, gender queer may be new terms. But the truths they contain are far from new. In earlier times such folks were lumped together in vague terms such as’bohemian‘ or, if they were non-threatening (or wealthy) they would be ‘eccentric‘.

Related concepts:
@ Linguistic determinism: “the idea that language and its structures limit and determine human knowledge or thought, as well as thought processes such as categorization, memory, and perception,” (source).
@ Newspeak: “a controlled language of restricted grammar and limited vocabulary, meant to limit the freedom of thought — personal identity, self-expression, free will — that threatens the ideology of the regime,” (source).