In 2010 I posted my coming out story here. That post mentions that I sent a Letter to the Editor of the local newspaper and Came Out to my family, then living in a village about 40 minutes away. Their warm, loving acceptance followed. I did not discuss in that post what happened where I was living.

When I came out I was I was active in the local community theatre group and working in the Camera Dept of a K-Mart store. After my Letter to the Editor was published I received one anonymous phone-call of support, and no negative ones. I was pleasantly surprised. A few days later I was fired from K-Mart. Although I had been there less than 90 days, and so was ‘probationary’ the HR Director called in the Store Director to try and convince me it was ‘routine’ and had nothing to do with that letter. Not that there was, back then, any sort of anti-discrimination legislation to protect me as a gay person. My efforts to point out the irony, hypocrisy, or sheer silliness of their argument went no where. 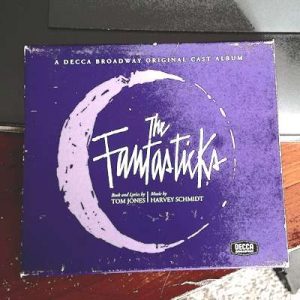 So I left. I went immediately to the theatre where we were preparing for our second production; “The Fantasticks“. A beautifully simplistic musical that may be best known for “Try To Remember“. In light of my decades-long repression of traumatic memories, the irony, hypocrisy, or sheer silliness of loving that song is (now) obvious. Leon Bushey (who, with Shirley Robinson, were my self-adopted theatre parents) immediately put me to work on set construction. Smart man, I miss him.

“The Fantasticks” premiered off-Broadway in 1960 and ran for a record 17,162 performances. The 2006 revival is set to close in June, so I will also miss that production. The impending close led SiriusXM (satellite radio) Broadway channel to put some of the original cast recording (pictured here) into their rotation. But I digress.

A few months later I returned to Toronto; my parents had moved back when Dad accepted a work transfer. I found work at the Camera Counter of a pharmacy in a downtown office tower. There was that sudden trip to Colonial Williamsburg that may’ve been a birthday event (an update on that to follow). After recovering from a bout of mono (hidden in part by a case of strep) I moved to a rooming house right downtown. Much of the poetry in my chapbook (heavily discounted for National Poetry Month) is from that period. The book’s description puts it thus:
“Moving back to Toronto (his birthplace) as quickly after graduation as he could, he did more than his fair share to celebrate life as a gay person and promote ‘sexual rebellion’. But some nights he found his pen mightier than, well, his sword. Some of the selections in this volume were written in one or another neighbourhood bar or in one of Toronto’s bath houses. He doesn’t claim to have found answers there to all the ‘big questions’; but offers these writings as notes on his journey.”