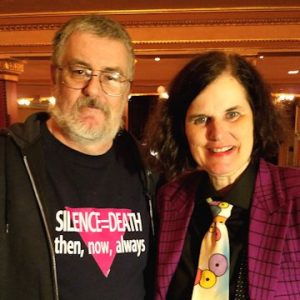 I was not able to be in the audience for Paula’s previous show in Columbus (September, 2015) but I imagine at that point she was still doing the mostly non-political material that I heard (and reviewed) in her 2012 Columbus Show. It’s not that Paula shied away from adult material; but sex, politics and religion have always been minor subjects. Life with over a dozen cats, a few other animals, 3 kids, and travel for work have been the mainstay of her self-described OCD-based inability to stop talking.

Of course anyone who follows Paula on Twitter (most of her tweets also post to her Facebook page) has seen the change. Starting with her comment shortly after the election that “now is the time to live the life of compassion, generosity, kindness, and contribution that appears to be missing from our new President.” (on Facebook 11/09/16) Paula has become vocal about the clear and present danger. Which is not to say that she had totally avoided speaking out on issues; her work to reduce (or eliminate) the presence of computers and other so-called smart devices in schools is not new. It has ramped up as studies come out that show the risk of severe brain damage to youngsters who get trapped in a flat world. There seem to be clear parallels to the risk that pot use presents to developing brains. As a parent herself, she is speaking from experience.

I was curious before tonight as to how much her material would change to include political content. That’s not her main gig- she’s not competing with John Fugelsang. On the other hand, the combination of the 2016 US election and co-Whose Line star Colin Mochrie tweeting about his transgender daughter has brought Ryan Stiles to the twitterverse with a vengeance. Comedy of all forms- stand-up, sitcoms, parody songs on youTube and memes that’ve replaced the Protest Posters of a century ago- are necessary im preserving our mental health while we #Resist.

Paula has taken the wise course of adding some political material without overpowering her well-known (and loved) focus on other things. And, of course, riffing off whatever the audience feeds her- from the seller of sh!t to the light sabre dentist. I can’t be sure if she swore at her previous show but the F word was used at least a half-dozen times. I’m no prude, and they were never gratuitous, but I and others certainly noticed. The show, and Paula, have changed and grown. Progress, one might say.