We queer folk have centuries of experience saving ourselves, and often much of society, when confronted by hate. From f*ggots burned at the feet of ‘witches’ to ‘loving in the era of aids’ we will not surrender. We will not let them take our love nor our pride. Which is so much easier to say than to live.

I came out in 1978- just before the virus that would be identified as HIV burst out of hiding, less than three years before the February 1981 Toronto Bathhouse Raids reminded us that a puritan moralistic power structure had yet to accept the words of then Justice Minister (later Prime Minister) Pierre Elliot Trudeau, when he said “there’s no place for the state in the bedrooms of the nation.”

That was a speech in Parliament during debate on changes to the Canadian Criminal Code that removed gay sex acts between two consenting adults in private. The changes were signed into law just as the Stonewall Riots occurred in NYC.

It took 36 years, but federal marriage equality arrived in Canada on July 20, 2005 as Bill C-38 (Law on Civil Marriage) received Royal Ascent. Yes, I feel the pull of returning to my other homeland. My intention, since I moved down here 20 years ago, has been to retire to south-western Ontario where my two sisters and their descendants now live. After almost 40 years of fighting the forces of bigotry, hatred and ignorance, being the Great Gay Uncle In Residence (GGUIR) is very appealing. So incredibly attractive. Loving family, Timmie’s, the Maple Leaf, escape from the agism that keeps me under-employed; I feel the call.

By the way, for those who also feel drawn to the Great White (as in snow) North, it is a two year wait for ‘Landed Immigrant‘ status in Canada- that’s equivalent to ‘Resident Alien‘ in the USA; the first step in becoming a true Canuck.

In two years, if we fight against this depression and fear we now feel, we can flip the House and a few Governorships. Congress is still broken, and the federal government can’t fix stupid, so trump can experience what Obama did in 2010 when the House changed. After the next Census the States redraw Districts… we need to get progressive, or at least moderate, folks in Office before then.

I will not fault anyone who’s endured the struggles of the past decades and decides to ‘sit this one out’ anymore than I could ever condemn those who 30 years ago (facing what hiv/aids was doing) decided to ‘check out’ on their own terms. Compassion and understanding are what I offer.

But I took my vows as Sister Flagg 33 years ago in part to add JOY to the battles we were fighting then. Sister Flirt will not rest now. This is why we must not forget our Sistory…. love and joy must balance our righteous anger. We must not become the worst part of the enemy to defeat them, or we have lost.

“For all those whose cares have been our concern,
the work goes on,
the cause endures,
the hope still lives,
and the dream shall never die.“
Senator Kennedy

“Now is the time to live the life of compassion, generosity, kindness, and contribution that appears to be missing from our new President.
Paula Poundstone via Facebook.

“Happy birthday!! I don’t know what to wish for you this year, so instead I’ll thank you. Thank you for SHOWING me way equality matters. Not that I wouldn’t have gotten there on my own, but seeing you have to fight for everything inspired me to take up your fight! Thank you for *ALWAYS* being you even when it would have been easier to hide as someone or something else. But most of all thank you for being my uncle, and proving that love knows no bounds, and love is just love. Even between two boys, I love you”
from a FB post by one of my nephews. 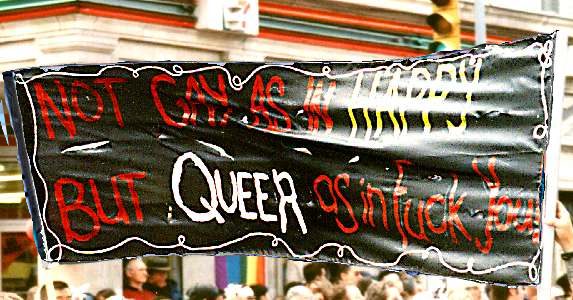 From 2004 Pride Parade in Toronto, ON