When approached about why Sister Flirt’s habit and face are noticeably different from most active Sisters SPI/OPI I say that Sister Flirt is wearing the habit of his (Sisterly) youth. While this is true, it misses some information that I think is valuable. It ignores the current and future modifications that reflect Flirt’s new home, and glosses over much of her sistory. 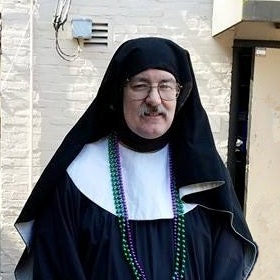 The current outfit starts with the official habit of the Toronto Order where Flirt took her vows. More than just a nod to the Sisters of the Toronto Order, this dress has seen more action (well, perhaps not ‘more’ but certainly a great amount) than Flirt’s boy persona. This is the habit Flirt (then Sister Flagellation of Forbidden Fruit) wore at every manifest other than the few made in the Official Summer Habit (cf “Three Nuns In The Fountain“). This big black dress has been in parades, marches, protests, parties, blessings and High(ish) Tea.

The white starched cotton bib (collar) from Toronto is rarely worn now, in favour of one of the crochet collars hand-made by Sister Heidi, Abbess of the Columbus Sisters. The collar thus matches the crotchet wimple or caplet also made by Heidi (she is doing her part to bring handcrafted habits back in style). In addition to being a personal touch to habits, the crotchet work Heidi does for each Sister is a subtle unifying touch to our varied personal expression.

The other major visual aspect is the veil. Flirt has her original Black Veil presented upon his progression to Fully Professed Sister. It is lined with his white Novice Veil. The pairing is a reminder of her journey. That veil is visible in the picture above. The Toronto Order tended toward similarity in habit, and a row of Black Veils and traditional habits has a certain visual power.

Now, of course, Fully Professed Sisters are generally free to veil themselves in whatever colour, size or material they wish. While Flirt rarely wears her Toronto Veil, it is still a prized possession. He has a new larger, shinier black veil as well as a growing assortment of options, constrained only by budgetary concerns. These are supplemented by various accoutrement- again restrained only by fiscal limitations. Sister Flirt, sadly, did not inherit Sister Sleazia’s collection of jewelry she’d wrangled out of the late Earl.

Flirt’s process of ‘modernizing’ his habit is intentionally slow. Balancing her Sistory and homage to the ’80s Toronto Order with the expanded, and expanding, new World Orders is a thoughtful process. In a time of high stress, hyper-short attention spans, and a word seemingly gone mad, “attention must be paid.”

Oh, the face. Yes, about that.

The Toronto Order, just as the Australian and some European ones, did not do the Whiteface that Founding Sister Vish used from that very first manifest. The non-painted face is often called MishFace, in honour of Founding Sister Missionary Position, who is most often sans make-up. Over the years the many benefits of whiteface has made it the most recognizable visual clue for many of the gathered fruitful. There is plenty of material on the history, symbolism, and usefulness of whiteface elsewhere.