In response to British chain stores selling t-shirts emblazoned with femme, self-proclaimed ‘aspirational celesbian’ H Beverly took to Twitter, and spoke to Britain’s Daily Mail. She complained the stores were turning an identity into a fashion statement:
“I think the shops don’t realize what the word means or they just don’t care,’ she says. ‘They’ve just taken a word that has a specific meaning to a specific group of people and sold it to people that it has no relevance to” (from New Now Next website report).

Yes, and as a long-time queer activist familiar with the power words can have, I get her point. Businesses are most ‘supportive’ of communities they don’t want to piss off- whether as a customer base, to avoid potential disruption/protests, or a source of inspiration. ‘Now that we’re friends I can use that word, right?’ The nature of the beast, at least in current ‘Western’ societies. Before I go any further, full disclosure. I use POD (“Print-On-Demand“) sites to sell apparel and other merchandise. Some of it uses ‘our words’ on stuff that may be purchased and used by non-queer folk.

There are parallels to the viral spread of games, apps, and photo filters found on ‘social media’. Is it a form of subliminal messaging? Acceptance through accessorizing? Perhaps lessening the power of a hateful word- although any word said with venom makes the hate clear. Whether peer pressure or whatever else, it’s a way for me to express some creativity and pay the mortgage. So I contribute, in some small way, to the popularization of ‘our words’. My personal discomfort lies in the potential for blunting the power of these words to resist assimilation. 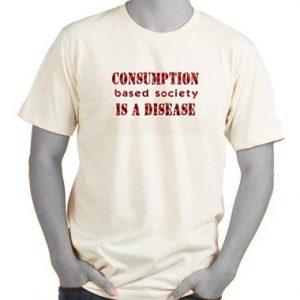 The other issue I struggle with about using POD-sites is that they, along with Amazon, Target and Wal-Mart (and equivalent brands in other places) further promote a consumption-based society. Most shoppers probably don’t get the irony of offering my consumption design shown here. It is one of a few dozen snarky designs available. POD-sites generally use ‘DTG’ (direct to garment) printing that lasts much longer than the iron-on transfers of my youth. But in my experience they aren’t as durable as skreen-printed shirts I have from 30 years ago. Those used fewer colours but more durable inks. Now you can get full-colour photographic designs to wear for a few years. Fashion.

This is not really a blind rant against progress, change, disruption. They all have their place. In some areas of society we need more of them. But just as using Amazon’s CreateSpace division to publish, and their main website to sell, my chapbook of poetry, the decision to embrace change should only be taken with a clear understanding of what is being rejected (or left behind) in the process. Sure, POD publishing meant I don’t have to find the money to print up a few hundred copies at a traditional printer and sell through my own website and such independent bookshops as remain. So in my small way I am working against independence; supporting the BigCo Empire*. Compromise; how much, in what areas, for how long, to what end- adulting is often not fun.

And, combining concerns about POD-site disposable apparel and businesses taking ‘our words’ are those Facebook ‘Community’ pages set up by unknown individuals. The page names are LGBT(q) friendly, and the folks who set them up might be queer themselves. But many are not; they are using one or another POD-site and marketing research that says we’re a prime demographic. I know some of them, and others are also members of POD-marketing groups I’ve joined. Again, I’m not against people making a living. But if BigCo is ‘stealing our words’ then so are some of these folks.

But back to H&M et al selling femme.

I am not saying I like BigCo profiting off ‘our words’ – but I am prepared to do so myself, and I prefer as little censorship as possible. I certainly am not saying folks who don’t like it don’t have the right to express their displeasure. This is exactly where ‘Free Speech’ and ‘Consumer Choice’ come into play. But I am saying ‘please don’t jump on the protest bandwagon without thinking it through’. There are plenty of things that annoy, irritate or offend me- but very few I would ever propose banning.

On 09/28/18 it was announced that CafePress is being acquired; and I have closed my last remaining shop there.