This is an imperfect television docudrama that presents an overview of LGBT (but mostly G, with some L and a dusting of T, but no real B) history from the early 1970s through 2013 based around three people who’s paths cross in San Francisco, and who also play some part in national events this century. If you think that sentence is long, imagine how much history was crammed in (or left out) in condensing those decades into less than six hours of actual show time. Hulu lists the four episodes’ total run time as 5:40 without commercials, but with titles, credits and brief recaps.

This does not mean we can’t critique the contents; outline what we consider important mistakes or missing material. We can. We must. This is but one piece of proclaiming our history, herstory, sistory. I hope we can do so in a way that encourages more such projects rather than scare them away.

For those who want to know my connexion to that history. I came out to my family and the readership of a small city newspaper in south-western Ontario in the Spring of 1978. Soon after that, but still before my 20th birthday, I returned to Toronto- city of my birth, always and forever my hometown. I was active socially, sexually and politically in Toronto’s ‘gay scene’ even before the 1981 bathhouse raids. I was a peer counselor on the GYT (Gay Youth Toronto) phoneline. And then in 1982, well 1982 equals G.R.I.D. Before it was called HIV/AIDS. But I’m not going to repeat the show’s contents. As Canada’s largest city, Toronto had a vibrant gay and lesbian community. I don’t say “LGBTQ” because most of us then did not fully appreciate the full diversity of non-heteronormative sexuality and gender. Times change and we, hopefully, learn and grow.

So, back to “When We Rise“. I did not live in or visit NYC or San Francisco during that period. But even without current high-tech ‘social media’ the news spread. Our community shared many similar tragedies, fought similar battles against fear, ignorance and shame, and governmental inertia as other cities. How the mini-series portrayed those battles and tragedies played out in San Francisco is based on contemporary sources and recollections of survivors; they should certainly dispute or correct details they feel are inaccurate.

There are some things I noticed, which I hope are based on time constraints rather than conscious or subconscious prejudice or privilege-blindness.

The 1966 riot at Compton’s Cafeteria in San Francisco gets as brief a mention as the 1969 Stonewall Riots in NYC. Does that casual mention of the local event indicates the screen writer’s bias or an accurate portrayal of how many gay men of the time felt about trans folk? The show’s unflinching handling of the racism of that period suggests the latter. Sadly many gays and lesbians were not, are not, supportive of trans and gender-queer folk.

Likewise with “Bi invisibility“. An accurate portrayal would’ve have a gay man dismissing someone’s claim of bi-sexuality as it being “a waystop on the road to full gayness.” Not that the opinion was necessarily accurate, but it was a very common reaction. Based, in my own case, on so many such men later embracing “full-on gayness.” The lack of any such character or judgement most likely reflects the practicality of editing down too much material, too many issues.

Someone on-line made a comment about the absence of sex scenes. Aside from being premiered on ABC- a Disney company- the series doesn’t waste valuable time with what would clearly be a distraction.

Also under ‘tv practises’ is the question of why there were so many commercial breaks. Not the number of commercials but the frequency of the breaks. Was this done to give us respite from the material? Did the producers know or suspect it would be well-sponsored? Were ad spots added shortly before broadcast? I would have preferred fewer breaks, so that it was more of a movie-like experience. However I can imagine that if that led to 8 minute breaks there’s a risk of channel-surfers not returning. 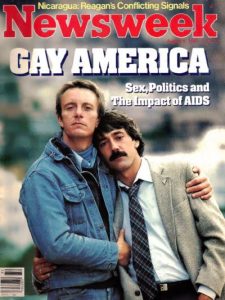 The selection of individuals to include, and which ones to act as lead characters, may be as much a reflection of who is available to be interviewed or editorial choices designed for balance or representation. Perhaps with more time, the series would have included so much more about Bobbi Campbell. He is portrayed in the show, but very quickly. He is the person who posted pictures of his KS lesions in a shop window. He talked and wrote about living with the virus, and was on the cover of Newsweek’s 08/08/83 edition as the self-proclaimed “AIDS Poster Boy“.

Last and most definitely not least. The total absence of the San Francisco Sisters of Perpetual Indulgence. Not because I’m a Sister, not because anyone who lived or partied in the Castro since 1979 has seen the Sisters, and not even because they get lots of press. The absence of The Sisters from this docu-drama is noteworthy because:
* In 1981 the Sisters presented the first known fundraiser for people with aids;
* in 1982 the Sisters prepared and distributed the first safe(r) sex pamphlet for the community;
* Sister Boom Boom’s 1982 campaign for Supervisor (and Mayor Feinstein’s reactions) touch on government/community tensions shown in the series;
* In 1983 the Sisters organized the first candlelight vigil for our lost souls;
* Bobbi Campbell (see previous paragraph) as Sister Florence Nightmare RN co-authored the pamphlet mentioned above;
* Other named characters in the show are, or were, active members of the Sisters.

There are still plenty of stories from then that can be told; no one series could cover it all. Perhaps no one person should be burdened with trying to present the history of a group as diverse as LGBTQ. Much less the variety of queer tribes found in cities and rural areas across this continent and others.

This series did a great job of presenting the slice that it did. It was well-written and balanced contemporary clips with well-done performances that both delighted and devastated. It took me most of a week to watch the entire series because it was as heart-wrenching as my memories.

The script was based, in part on Cleve Jones’ book When We Rise: My Life in the Movement.

Related Posts:
Pride, Protest, Party
The Temperamentals
Out Of The Closet Players.

* Federal Trade Commission rules require bloggers to clearly identify when they have or will receive compensation. I will receive a small affiliate commission should you make a purchase after following any of the Bookshop.org links in this blog.