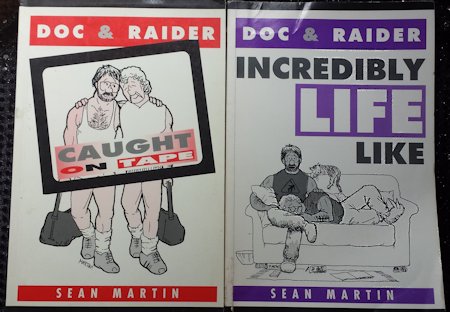 As regular readers are aware, I am a big fan of Sean Martin; creator of Doc & Raider, The Littlest Blog and his other work. Fans of D&R know that current strips and panels are digital- computer generated. Last century D&R was hand-drawn and Sean published two volumes of his early work. I purchased the first, Doc & Raider: Caught on Tape when it came out in 1994 and Sean inscribed the title page to me.

The other collection of D&R ‘old school’ is Doc & Raider: Incredibly Life Like, published in 1996. That was the year I moved down to Ohio and I did not immediately know it was published. Once I was aware of it, there were only a few used copies available on-line; at outrageous prices. After a discussion about Sean’s ‘old school’ D&R books on Facebook, I rechecked the Amazon marketplace and found some ‘used; good condition’ copies for around $15. A reasonable price for a rare, out-of-print piece of history.

The book arrived this morning. I was thinking of how to get it to Sean to autograph, but upon opening it I saw that it was already signed. And to someone specific; the inscription was clearly personalized not generic. I messaged Sean and asked “Do you want to know the inscription to bust them or would you rather not know?” He replied that he’d like to know, so I sent him the wording. He replied that he did remember who the owner had been, and that he is “no longer with us. Keep it in good spirit, it was owned by a nice guy.“.

20 years ago I would not have been so glib about someone (presumably LGBT) ‘insulting the author’ by selling or ‘dumping’ a book. The number of people who’s library (of ‘gay’ books, movies, music etc) disappeared as their partner and biologicals fought over the estate or their residence was ruthlessly cleaned out was still high. Not as high as the decade before that, but still a real possibility to be considered. These days, not so much. We have come so far in fighting the disease and the stigma. It’s a relief not to be constantly on ‘high alert’ on how it will impose itself into my reality. When it does, it is a bit more of a shock. I try and find comfort in knowing that this book brought some delight to “a nice guy” who Sean liked. Someone he knew well enough to recall even now.