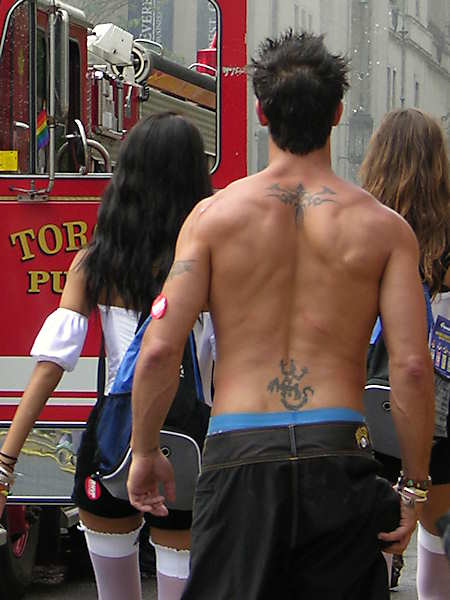 We get back to Toronto each summer for at least some of the Pride festivities…. the full Pride is something like ten days- and longer if you take in the “Queer West Queen West” counter-celebration that is less mainstream, less commercial, more queer arts. Here is just one of the million plus people that marched in, or stood and watched, the 2008 Pride Parade.

The latest set of initials has grown to something like LGBTTQQ2IT – I can figure out Lesbian, Gay, Bisexual, Transexual, Transgendered, Queer and Questioning…..not sure about the last bit. In Toronto (where same-sex marriage is legal) this is a huge community celebration of diversity and joy. New this year; active members of the Canadian Armed Forces marched. For the past few years the Mayor of Toronto as well as many other politicians have joined in the march as well as having a tent at the Street Fair Saturday and Sunday.

As someone who lived through the Toronto Bath-house Raids of 1981, it is quite something to see representatives from a number of local police departments. Last year I saw Toronto’s Chief of Police in the Parade… not sure if he missed this year, or if I missed him as I tried to enjoy the parade and the audience while taking pictures.