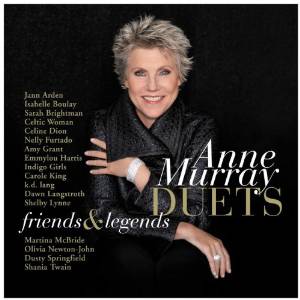 She’s a Canadian legend, great singer of ballads- and has lasted longer than many artists. She is a strong women who hasn’t lost her feminity- can you tell I love her? And her new album. Not just duets, but songs that she has been known for (going back to her ‘early days’) newly recorded with incredible partners. From Olivia Newton John to Shania Twain; these are incredible recordings. Almost a dozen and a half songs (mostly ballads) that will surely be found at more than one same-sex marriage in Canada and elsewhere.

Hard to pick one favourite.. but “Time Don’t Run Out on Me” with Carole King (that song’s co-writer) would be it. As much as I love k.d. and Shania and Celine, Anne will always be my favourite Canadian chanteuse.