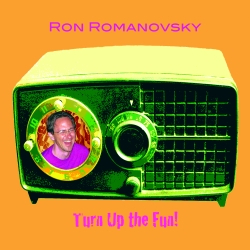 Happy Days
This album (yes, I’m old enough to use that term) is ‘just what the doctor ordered‘ to fight off homophobia, bigots (religious or otherwise) and the winter blues. Ron has returned to his roots as part of “Romanovsky & Phillips” to bring us joyous, rebellious and thoughtful lyrics that remind us why they were such a big part of the Gay Folk Movement. The music shows what he’s learned over the past decade exploring his ethnic heritage and great French music. Although I did experience a flashback to “Guilt Trip” during one number.

Yes, I still have my R&P vinyl:
“I Thought You’d Be Taller“,
“Emotional Rollercoaster“,
and “Trouble in Paradise“.

In addition to Ron’s newer CD’s:
“Je M’appelle Dadou” and
“Pittsburgh to Paris“.